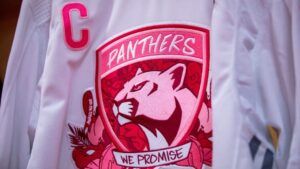 The Florida Panthers will host a “Pink in the Rink” night on Friday when they play the Tampa Bay Lightning to benefit the Promise Fund of Florida. The event is the Panthers’ first specifically dedicated to breast cancer awareness, a particularly personal passion of their general manager Bill Zito. Zito’s wife Julie was diagnosed with breast cancer in 2019 and is now in remission. His sister Maggie Schultz died earlier that year after bouts with Hodgkins’ disease, breast cancer and pancreatic cancer. His mother Priscilla Zito fought pancreatic cancer multiple times. He stressed the importance of using the Panthers’ social influence to reach as many folks as possible about breast cancer, adding, “it’s incumbent on us to help.” Zito also aims to celebrate survivors and caretakers with the event.

“It’s our responsibility. But in tandem with that, it can also be our passion,” he said. “And maybe that’ll be our takeaway [from Friday].” Was it strategic planning to host the event, where partial ticket proceeds go toward helping local women detect and treat breast cancer, on the same night as what should be a well-attended game against the Panthers’ in-state rival?

“It’s fortuitous for certain,” Zito said. “Certainly it’s going to be a well attended game. And the more people, the more awareness, the more we can spread the word and get people to understand how important both early detection and subsequent navigation is. It just kind of worked out, and we’re thrilled that it did. And very excited to be able to host on the night of a big game and certainly during breast cancer month.” Ticket proceeds will go to the Promise Fund, a Palm Beach County charity dedicated to helping uninsured and underinsured women overcome social determinants of health to navigate the medical system in order to get the kind of treatment they need. This includes access to early screenings and cancer treatment for breast and cervical cancers. Social determinants of health include racism, economic hardship and housing insecurity, according to a 2021 research essay in Frontiers in Public Health. Brinker also cited access to transportation as a major hurdle (which is why the Promise Fund works with Uber). About 42% of women in Palm Beach County are not white, according to a 2016 Status of Women in the States report. Additionally, women in Florida earn a median income of $35,000 from full-time, year-round work, according to a 2018 report from the same organization.

The Promise Fund and its community partners have supported more than 16,000 women in South Florida since its inception in 2018, founder Nancy Brinker said. That number should reach 20,000 by the end of this year or the first quarter of 2023.

All fans at FLA Live Arena Friday night will receive pink pom poms and a giveaway with keepsake links to resources curated by Baptist Health Cancer Care. The hospital will also have its “Pink Truck” out on the JetBlue Tarmac before the game to give fans the chance to learn more about the disease and the importance of screenings.

The Panthers will wear exclusive pink and white warm-up jerseys designed by local artist Surge. The jerseys are available for folks to bid on at FlaPanthers.givesmart.com, starting at $300 as of Thursday. Brinker created the Promise Fund after decades of work promoting cancer awareness and raising funds for research. She founded Susan G. Komen for the Cure in 1982 after the death of her sister, the charity’s namesake. Brinker also served as the World Health Organization’s Goodwill Ambassador for Cancer Control. President Barack Obama awarded her the Presidential Medal of Freedom in 2009. All her efforts are part of fulfilling a promise to her late sister, who asked her to cure the disease just before she died. “So I told her I would,” Brinker said, remembering one of the last conversations she had with her sister. “And then after that, she said to me, ‘I want to make sure that where a woman lives doesn’t matter whether she lives.’ Which was a brilliant statement coming out of the mouth of a 35-year-old girl dying of this disease.”

Zito and Brinker are linked by Brinker’s son Eric and Zito’s wife Julie. The two became friends at Bradley University in Illinois. When Zito got the job with the Panthers, Julie Zito reached out to Brinker about a partnership between the club and her organization. Brinker will drop the first puck Friday night, her first Panthers game. When she started Koman for the Cure in Texas, Brinker recognized the value of tying sports to spread her message. Under her tutelage, the charity entered into a partnership with the Dallas Cowboys. She views the Promise Fund’s relationship with the Panthers as a similarly crucial one. “People are always looking for new ways to be entertained, and they love sports,” Brinker said. “…This is a wonderful way to reach people. You get such a great reach with a sport, so we’re very excited about it.”