Conquer Magazine: A 40-Year Battle Against Breast Cancer: How I Continue to Honor My Sister’s Dying Wish 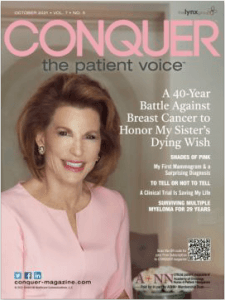 “You have breast cancer.” These are 4 gut-wrenching words that nobody wants to hear, yet more than 300,000 women and men in America will confront the disease for the first time this year.
For me, it all began with a phone call in 1977. It was my big sister Suzy (Komen), calling me panicked, because she had found a lump in her breast. She was only 33, and she was diagnosed with breast cancer. Three years later she was gone.

Remember that 40 years ago, breast cancer (and all cancer for that matter) wasn’t just a life-threatening disease. It was also a social stigma. People thought that it might be contagious. After Suzy’s diagnosis, some people would cross the street to avoid her. You couldn’t even say the words “breast cancer” on TV.

As Suzy lay dying, she took my hand and asked me to promise that I would do everything in my power to end the threat of breast cancer forever. I promised her. And that promise became the foundation for Susan G. Komen.

When we began, we were not just fighting a disease; we were taking on societal norms, friends and neighbors who didn’t want to hear about it. And certainly, they did not want to hear from a group of women.

After my promise to Suzy, I began to organize my friends in the Dallas area, where I lived at the time. It was a small group. We had a shoebox, some index cards, and a broken typewriter, which was just fine, because our secretary later admitted that she didn’t know how to type. We were like an online start-up, without the Internet. It’s still hard to believe that a global cancer movement could begin that way.

Instead of focusing on what we lacked, we focused on what we had. The people who started Susan G. Komen all had their lives affected by breast cancer in some way. Some were survivors; others had family or friends who fought the disease. So, although we were not doctors or scientists, in many respects we were something even more powerful—moms, wives, daughters, and sisters. We had passion, and we knew that others who were affected by the disease would share that passion.

A Lesson in Failure

However, in spite of our energy and enthusiasm, the early years were a lesson in failure. As we tried to learn more about the disease, we talked to many physicians, who in those days were mostly men. Naturally, we were not taken seriously. They thought we would get bored or lose interest. They didn’t think we would ever understand the science, but the exact opposite happened. The more we learned, the more we were interested in understanding. And our enthusiasm and determination intensified.

I cannot tell you how many times we were dismissed, hung up on, and had doors slammed in our face. I remember one gentleman telling me that no one would ever come to a Race for the Cure.

One of our earliest ideas was to partner with the intimate apparel industry. After all, if you want to reach out to women about breast cancer, what better way than by talking to people who manufacture bras?

So, I flew to New York City to meet with one of the largest companies in that field. They said “No way,” and that the last thing they would ever want was to have their product associated with cancer. I was furious. But as the anger subsided, it dawned on me that they had a point.

We used events such as the Race for the Cure to build a community and show women they were not alone. We used the passion of women and men who had been touched by this disease to build community affiliates, and this is how our movement grew.

In the past 40 years we raised and invested nearly $1 billion into breast cancer research—second only to the U.S. government. We also invested more than $2.2 billion into screening, education, and treatment programs. And most important, we saw a 38% decline in mortality from breast cancer in the United States between 1989 and 2014.

I’m proud of these accomplishments, but I’m not satisfied. Marie Curie, the famous scientist who was the first person to win 2 Nobel prizes, said, “One never notices what has been done; one can only see what remains to be done.”

As I look around, the work that remains to be done in my home state of Florida has to do with healthcare disparities related to breast cancer. Two recent studies demonstrate the problem. One found that Florida ranks 50 among our 50 states in its share of poor women who do not have health insurance.1 A second study discovered a growing disparity in breast cancer deaths from 2010 to 2015 in Florida.2

We’ve made great progress in research, treatment, and education, but people of color and women with limited access to resources are increasingly more likely to die from cancer than others. This is especially true in the Sunshine State. Over the past 5 years, 15,000 women in Florida died from breast and cervical cancer—most of whom had not received proper care.

Cancer experts say that addressing healthcare disparities is the last piece needed to complete the cancer movement. And that is why I have co-founded the Promise Fund (www.promisefundofflorida.org)—a first-of-its-kind program that brings services to individuals who otherwise cannot get to us.

It’s a “hands-on, boots on the ground” kind of approach that embeds healthcare navigators into high-risk communities to provide education, screening, and care if needed. These navigators will not just be talking to communities; they will be living in communities. And research has shown that navigation patients have significantly better health outcomes and survival rates.

I am excited about the Promise Fund, but I know that our work will not be easy. Fortunately, I have heard that my work is impossible for 40 years. In the course of those 40 years, I’ve seen amazing things happen.

The fight against breast cancer has taken me to every corner of the globe. And I have witnessed how this deadly disease, instead of alienating individuals, can unite people.

Margaret Mead once said, “Don’t ever doubt that a small, thoughtful group of citizens can change the world. Indeed, it is the only thing that ever has.”

In my own life, as Suzy’s younger sister and a breast cancer survivor myself, I’ve seen this saying come true. I have lived it. And I know that there is no greater power than the power of women standing united, ready to help one another.

This issue has been my life’s passion, and I’m more excited than ever before for the opportunities that lie ahead when we work together.